Spring Has Sprung a Leek With spring, lots of new activities, and chores, arise faster than the daffodils.  For me, this always includes morel mushroom hunting (let's just say it's not my year) and digging up leeks.

Wild leeks, or ramps, are significantly smaller than the version you find in the grocery store but taste, at least three times, better and are extremely versatile.  My favorite recipe is always bacon and leek mac and cheese but I use them as a substitute for onions or scallions in most recipes this time of year.

Another wild edible in abundance this time of year, to the dismay of most, are dandelions.  I stumbled across this stretch of a simile the other day from my angst-filled college years--

"Life is like dandelions.  Beautiful yellow cups that everyone hates.  People tug at its tap root, kick at its developing blossom, spray its leaves with poison.  At the end of its full week of life, they hate it even more.  A perfect cloud soft, bleach white sphere that only wishes more sunshine for each lawn.  If they only looked softly at the petals they would see its characters beauty.  But they rip, causing a slow ooze of milky blood to sticky up their hands.  Releasing a tacky smell that holds for a moment once inside you and leaves a bitter, acrid taste that binds to your throat.  Each autumn the flowers are forgotten under a golden red shower and they whither.  Spring comes and everyone hates them again.  A vibrantly defenseless explosion of light rashly hated and rashly forgotten. Each foot a truncheon on their persistence to lighten the world." 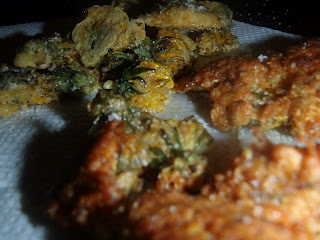 Brilliantly written, I know.  I suppose I was somewhat right back then.  Life is like dandelions in the sense that someone can come by at any time, pop your head off, and fry it up in some butter.  With a simple corn meal/flour batter and some sauteing you have got a great appetizer or side dish.

While we are on the topic of wild edibles, the local stream has been packed full of non-native trout again.  As the good ecologist I am, I went forth to help lower the numbers of fish and prevent the further spread of the invasive fish.

Day old stocked trout are like confused children who had cruel parents their whole life.  Their parents tell the children how wonderful candy is, but they have to be very cautious what pieces they eat because some are poison.  The trout are dumped in the stream used to eating pelleted meal, and when a tasty mayfly bonbon or a minnow chocolate bar slips past them they hesitate.  They look at the sweet and turn away, then change their mind and return to inspect it again until it floats out of range or another more daring, or rebellious, child engulfs the treat.

I stood in the stream and watched the trout behave this way.  There was a pod of thirty or so fish that would chase anything that moved but would hesitate, turn around, hesitate and then decide if the the item was a food source.  It was an interesting show, especially when a black bunny leech confection was the potential toxicant.  After a few fish on the fly rod it was time to fill the stringer which was done in short work with a panther martin spinner which netted me my first brown trout.


As for the chores, I got the garden dug, and what a chore it was.  Digging, pulling out tree roots, dumping in peat moss and compost, mixing and leveling was done in the last two days.  I am attempting modified square foot gardening with the hopes of filling forty-eight square feet with over a hundred plants, as well as making an herb planter for the deck.  I'm sure more posts will come regarding my successes.  If someone is in need of some sod that has a small potential to actually revert back into grass, I am willing to part with the pile in the picture.

And this is the part of the blog post where I dump a bunch of photos that don't need a narrative.