Installing a rod holder on my kayak was part of my things to do list.  With this streak of warm weather we've been having and the first day of spring today, I needed to finish what I was planning to do all winter.  I bought a pair of Cabela's rod holders back in October but I had some hesitation to install them.  Part of my procrastination was my fear to put a hole in a perfectly good boat.  If my kayak was a sit on top, I would have probably put it off even longer.  Once I committed, the installation took only fifteen minutes or so.

The first step was simply tracing the rod holder with a Sharpie where I wanted it to go.  I chose a spot that I could reach easily, but I had little real estate to work with.  I wanted the rod holder to be in back of me and out of my paddle stroke, however, any of the area that the holder could have been perfectly placed had ridges.  I found a spot on the top of a ridge that had the most surface area and reluctantly marked. 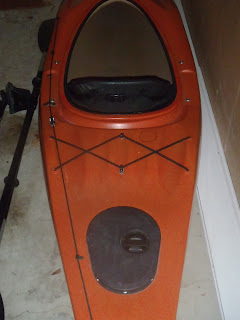 Next, I drilled the impending hole with a 2" hole saw.  After the hole was in place I realized the top of the rod holder is in an oval shape so some filing needed to be done to extend the hole. 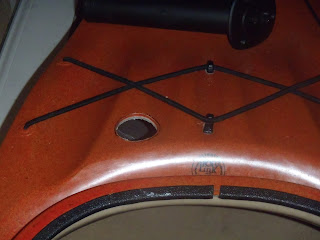 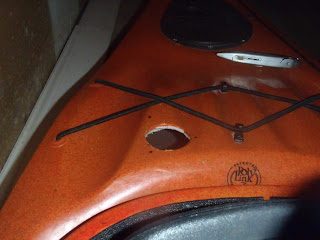 Finally, the screws were put in place. 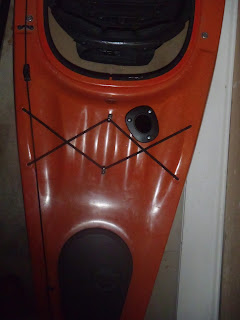 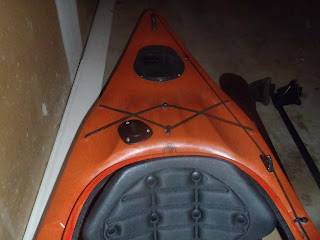 I thought of using a silicone gel to seal the hole but opted not to.  There won't be much splashing of water where it is placed and if significant water is coming in through that hole, I will be worrying more about my life jacket being on correctly.  Had this been a sit on top kayak, I would have definitely used a sealant and procured a cap for the holder.

This weekend it will get the on the water test.  I'm pretty excited to have a spot to put an extra rod that's not between my knees.  hopefully its out of the way of my back cast.