The One That Could Have Got Away

I arrived at the nearby reservoir with fog still hanging heavy on the water.  With June-like air temperatures, the water is already in the high 50s.  I'm never on the water this early in the year so I had low expectations.  This was supposed to be a scouting trip.  The park drains the reservoir every winter for spring run off (which we had none of this year).  So, with the water still four feet lower than summertime, my plan was to run most of the shore line taking pictures and mental notes of the structure I can't normally see when the water is raised back.  I paddled my kayak to the opposite shore and started throwing a white spinnerbait; taking pictures when a partially submerged log or a rocky ledge came into view.  With the size of the lure I hardly paddled as it was pulling me along a steady pace down the shoreline.  I even started to steer my kayak by retrieving my lure.

After two hundred or so casts, I thought of changing my lure choice, but I always have a good feeling using spinnerbaits.  I slowly began paying less attention to my fishing and my eyes and mind wandered.  I watched the bluegills smacking gnats off the glassy water, a spider skitter across the slippery surface of my kayak, the carp beginning their water thrashing mating rituals, the walkers and joggers going around the lake.  My mind sank deeper into unfocused thought, jumping from topic to topic with no provocation and no set destination.  I was elsewhere in my thoughts, but in reality, there was no where else I wanted to be.  Drifting through the calm morning waters with the sun beginning to warm me and the turtles already stretched out on the logs.

My stream of consciousness started gaining speed.  Over the thought-worn rocks my ideas swirled and foamed, sprayed and tumbled. It pushed aside the small flotsam and rushed between, over, and under the larger obstacles on its way to harbors unknown.  Each runlet of conception added more strength to the torrent raging inside my brain.  Strong enough now where no force can stop it, eroding, moving, destroying anything in its pa-

My lure stopped.  My thoughts and ideas evaporated instantly, through my head, and back into the fog surrounding me.  My attention snapped back, but my mind still faltered.

I leaned back and drove the hook home.  Somehow in my daydreaming, there was a fish fifty feet away who was daydreaming harder.  Thinking of the boys who will court her soon, the shad she stalks until one strays from the school, the diving birds stealing her lunch, or perhaps about those strange metal and plastic fish she sees occasionally who never swim just right.  Oh, hey, there's one now.  Yes, let's eat that.  And I'm glad she did.

After a brief hand to fin battle I get her close and and I start shaking.  She fought well, but I didn't think she was this big.  I fumbled and swiped at her mouth causing her to dive deeper.  I got her back to the surface and make another pass that she nimbly shruged off.   I start thinking she is going to escape.  I reach my arm into the water, guide her in with the rod and lift.  Twenty three inches of scales and muscle and gills and slime.... a lot of slime.  It looks like she was swimming in pig spit.  Clumps of it clings to her body, her fins, her eyes.  Due to her poor health, I want to make this release even speedier.  Unfortunately, I'm as giddy as a schoolgirl when Justin Bieber asks them to the spring formal and apparently, my newly lost thoughts took my dexterity with them.  I manage to unhook my prize and take a slew of pictures of her letting her rest in the water often.  When I am done admiring, I open my hand, she turns under my kayak and vanishes back down through her suitors, the shad, the loons and those pesky fishing lures. 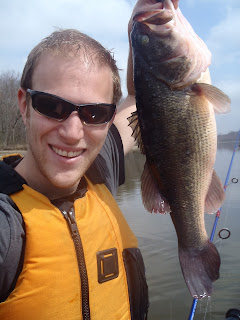 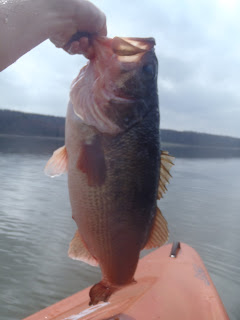 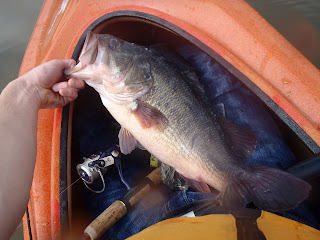 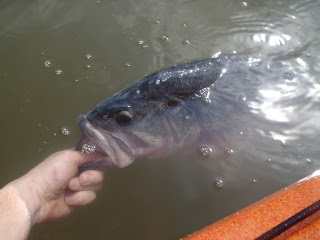