It has taken me a while to put my 2012 fishing license to use.  April is normally the earliest I start fishing, and with this May-like weather we have had lately I couldn't resist any longer.  On Thursday, the temperature reached 70 with winds around 20 mph.  This left the reservoir I was at pretty choppy and the winds made fly casting impossible.  Out of 2 hours of fishing I ended up getting a tiny perch on the spinning rod.  Friday, I went to a nearby pond that I recently discovered.  I put on a generic dry fly and started catching lots of bluegill.  Occasionally I will go out to with the sole intention of catching panfish.  I, as well as everyone else, I'm sure, used to love catching them under a bobber, but I have acquired a new favorite way to target them and that is with surface flies.  There's not many things better than seeing a fish eat the fly, especially when it's on the surface.


Friday's pond fishing left me wanting more so I tied up some new dry flies and headed out the door for the same pond.  I caught more bluegill than I did on Friday and also landed a couple of shiners.  If you have never caught one, they put up a good fight for their size and they hit the fly with the intent on unraveling its every thread.  After only a dozen or so fish the dry fly became a wet fly and the fishing only got better. The fish of the day was a large bottom-hugging redear sunfish that was pushing a pound. 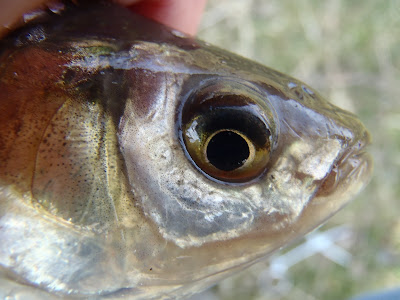 The guys cutting down trees Friday said they stock the pond with trout in the spring time for a kids fishing derby so I will be back to the pond after that for sure, or maybe I will show up during the derby and upstage some eight year old kids...  They tree guys  left a couple of lures that were lodged in the branches.  It just so happens that my favorite lures are the free ones!

A lot of the fish had black spot, a 3 host parasite that causes black specks throughout the fish.  It 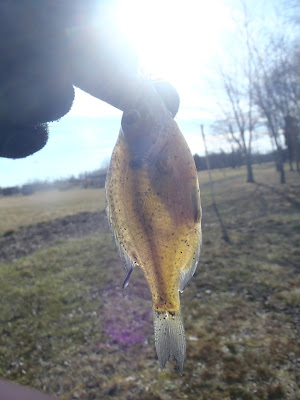 The bigger fish should come out in the next few weeks!