The bowfin, Amia clava, is a prehistoric fish, over 150 million years old, native to North American waters eastward from Ontario, Canada and southward to Texas.  The bowfin prefers swampy habitats and even waters that are too low in oxygen for most fish to live in, the bowfin can thrive in due to their ability to use their swim bladder to breath oxygen from the surface air.  Varying on region, the bowfin is called many names.  Dogfish, grindle, lawyer, mudfish and swamp bass are among some of the names it is commonly called.

The bowfin mates in early spring at a nest created by the male.  Once the eggs have hatched the male guards the fry for several weeks until the young are old enough to fend for themselves.  During this period, the male becomes a vibrant lime green to attract the female.

An easy way to distinguish a mature male bowfin from a female is to look for a spot on the dorsal half of their tail. 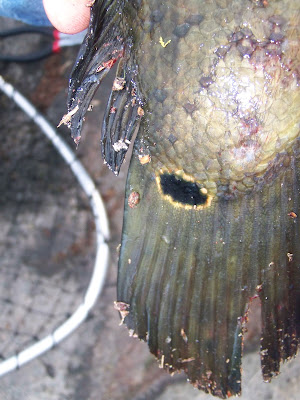 Although many anglers view the bowfin as a nuisance species, they can obtain a size over three feet long, will often hit live bait or lures and will put up a tough fight to rival any gamefish.  Some anglers incorrectly perceive the bowfin as a threat to a fishery and kill any bowfin they catch.  This is not the case and all bowfin that aren't being kept for consumption should be returned to the water immediately.  Live minnows and crayfish are most often used for bait when targeting bowfin as are any lure that resembles a crayfish.

Email ThisBlogThis!Share to TwitterShare to FacebookShare to Pinterest
Labels: Bowfin