The One That Should Have Got Away

The house my girlfriend is renting in Louisiana had a Walmart Shakespeare rod in the garage with what was once 8 lb test line.  After sitting there for a few years in the blistering summer heat the line is probably closer to 2 lb test.  In October, I used this pole with a found buzz bait and ended up with a small largemouth out of the pond thirty feet behind her house.  I ended up breaking off a good amount of the weakened line just trying to tie a decent knot.  On my last cast, the buzz bait kept going across the pond and the line dangled from the spool.

On my last day in Louisiana this week I opened the green pumpkin senkos I bought at Bass Pro.  My girlfriend tried to get me to use them earlier in the week but for some reason I didn't oblige.  My total fishing time using a senko is about 30 minutes but I had the basic premise of fishing them down.  Wacky rig, cast out and let it hit the bottom, wait a few seconds, lift the rod tip to a 90 degree angle and let the bait flutter back to the bottom and reel in the slack.  Rinse.  Repeat.

I was about 6 casts in and I had a hit, I set the hook, felt a good head shake and then the line was slack.  I was okay with not landing the fish because I knew I was at least giving the fish something they were interested in.  I also went out not expecting to catch anything since the only hook I managed to scrounge up from the garage was a size 6 Aberdeen.  I kept working the same area and had a couple more short strikes before the fish began to commit to the worm.  I learned I really had to watch the line for any change indicating a fish.  I ended fishing for 45 minutes before the light faded and I had landed three decent largemouths.


After my third fish and attempting to keep my fishing partner out of the water I was ready to be done but Jackie told me to catch one more fish.  I not-so reluctantly agreed and recasted the line.  I just finished saying, "You make it sound like it's easy for me to catch another one," when I had a very noticeable hit.  The fish took the worm like it raced across the pond to eat it.  I set the hook and felt solid weight.  I knew I did not have the upper hand.  I was using line a bluegill could break and using a hook that the same bluegill could swallow.  I pointed the rod tip down to ease some of the tension and started fumbling with the faulty drag.  The fish changed directions and headed straight up.  It broke the surface with its mouth wide open, made three head shakes, exposed its whole body, and slammed back into the pond.  I had no words for that sight but I heard my girlfriend say, "Oh my God!"  I thought that was the last I would see of that bass but it miraculously stayed stuck on the hook.  After a few seconds and equally as many expletives I was thinking of how I would land this fish.  I knew I had to land it quick but was afraid it would bolt when it hit the shallow mud bottom.  I babied the fish fifty feet down the shoreline reeling in slack when I could and finally decided I would push my luck some more and bring it to hand.  I got the fish close to shore, knelt down and pulled the pole back with one hand while my other hand was in the water awaiting its mouth.  I lipped the fish and heaved it out of the water.  It didn't get away.  I frantically asked Jackie if she had a measuring tape and she ran in the house to grab it.  I snapped a picture, she came out, measured it, and told me it was 20 inches.  I didn't believe her and remeasured.  I was hoping it was at least 21 which would have tied my longest largemouth I have caught but she was right, a solid 20.  Jackie scoffed at me but still took a few pictures of me with the fish.  I  normally don't care about weighing fish, but I guess that's because I usually don't catch them this large.  If I guessed it was between 4 and 4 and a half pounds. 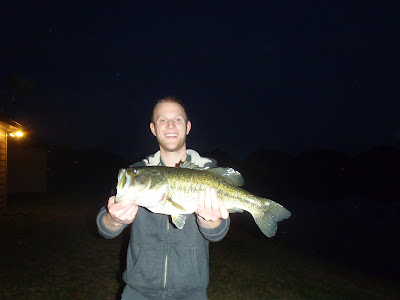 I will end up using senkos more this season as a result.  Hopefully with similar results.