I drove to a local park today to scout some water for the spring.  As I was driving along the stream I noticed a section of shore I don't normally frequent, glimmering in the sun light.  I parked near by and walked to the spot to find hundreds of broken shards of glass scattered on the beach.  Nearby there was plastic tattered in the trees, plastic cups half buried in the stones, and rusted metal sticking out of the mud.  I untangled the plastic bags carefully out of the trees and found a few intact and loaded them with trash.  When I left, the shore was still shimmering, but it was from being freshly cleaned and not from sunlight on glass.  As I walked further down stream I noticed tires, cinder blocks, and picnic table remnants tossed in the water.  Without waders and a wheel barrow, I left them still submerged.  I thought about the trash some as I walked back to the car and passed numerous trash cans. I figured most of the glass came from lazy, ignorant kids drinking beer and breaking the bottles on the rocks.  I have done my fair share of bottle smashing when I was younger.  While I was still upset about the glass, I could justify it somewhat.

Then I thought some more.  How many times have I seen trash that is completely out of place along a body of water?  Drano bottles floating downstream, tires in the middle of a lake, light bulbs shattered on shore, Windex sprayers hanging from trees, bags of trash left in the undergrowth. And how many times have we all seen trash that is clearly from anglers being lazy and ignorant children?  Every year I gather hundreds of feet of discarded fishing line while I am out fishing.  I have yanked line out of trees and tore it from shrubs from fishermen who purposely left there after a bad cast.  I have simply bent down and picked up line that people left there after they probably looked around to make sure no one was looking and dropped it when they decided they were safe from legal or moral repercussions.  Often it takes less than a minute to clear line from a tree and it takes seconds to wind line up that's found on the ground.  If someone leaves it there because they don't want to carry trash around with them, invest in some pants with a back pocket...  you can fit a whole lot of line and scraps from fishing in there.

This summer I saw a group of young ducks swimming at a local lake.  There was one duck that was clearly stunted from all the rest.  As I got closer I saw a few feet of fishing line sticking out of its beak.  The duck must have ingested one end and was in the process of having its intestines bound by a linear foreign body making it nearly impossible to eat or digest food.  I tried sneaking up on the duck to see if I could remove the line while it was on shore but I couldn't get close enough.  The duck most likely is dead now from an angler who was too lazy to roll up five feet of discarded line.

When you are out fishing, hiking, kayaking, hitchhiking, or otherwise outside of a building and there is a piece of trash, take three seconds and pick it up.  If everyone removed a few pieces of trash every time they went out, the places we love to visit would be much cleaner and healthier.

While I'm at it, please stop feeding the wildlife.  I'm sure you all know the consequences on the wild animals when they become dependent on humans for food.


Okay, these ducks are pretty cute, but the park isn't the place to teach your children how to be an irresponsible adult.  And you are doing it right behind my car and they shit all over.  And don't honk at the geese when you are trying to leave.  They are blocking your car because you fed them. Remember that? Three seconds ago?

On a happier note, I did see some spring flowers popping up between pieces of trash.  I doubt they will make it until the actual beginning of spring, but it's a good sign. 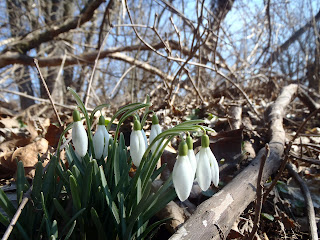