Over 10,000 years ago large glaciers slowly dragged across the landscape leaving a twenty mile scar in the surface that is now Saint Lawrence County, New York.  This left sparkling granite bedrock exposed, showcasing deposits of rust red iron and veins of snow white quartz.  The water was once a murky tone allowing visibility to six inches at best.  This is how she obtained her name, Black Lake.

Since her and I have been friends, she has cleared dramatically due to the invasion of zebra mussels. The clearing of her waters did not make her miss her stride; she could still produce fish after fat fish. The deepest of her waters is only thirty feet allowing for expansive weed beds choking most bays by late June.  These mats, sometimes covering thirty acres at a time, provide perfect ambush spots for large pike and bass.  Spots that were made for kayak fishing, but  spots that are difficult to fish with lures made from fur and feathers for the majority of summer.

Many decades ago, my great grandparents bought a small island and quaint cabin on Black Lake.  The island is a granite glob protruding ten feet out of the water for half an acre.  The weather worn rocks are spotted with thousands of years of lichen growth interspersed with wild blueberries and waist high grasses.  There has never been any running water and the only source of power is a generator that is clogged with sticky gasoline that has been tested to temperature extremes over decades of unuse.  Any food and water you will need for your stay must be packed accordingly and ferried across the lake on ice.  There are two refrigerators in the cabin, but they store the nonperishable food from the island's other inhabitants.  The magnet on one of these refrigerators reads "This is a No Frills Kitchen."  A kitchen, or cabin for that matter, was never made that this saying was more fitting for.

I have visited with Black Lake since I was born.  At a young age I wanted to catch fish like I saw the rest of my family doing.  I would waddle down to the water's edge and fill my yellow bucket with lake water.  I would then clamber up from granite ledge to granite ledge and go fishing in that bucket. Perhaps I had seen too many monstrous fish pulled out of that lake to want to tangle with any of them or maybe I thought it would be easier to catch a fish in a smaller body of water.  I would sit there with my Snoopy Zebco waiting for my Snoopy bobber to be pulled into the eight inch depths.  It never happened in that bucket, but I am certain my first sunfish, perch, catfish, largemouth bass, crappie, smallmouth bass, and northern pike came from slightly deeper water only twenty feet from where I had once placed that bucket.  And many of those came with Snoopy's help.  Slightly older my sisters and I would have casting competitions with one rule: hooks only.  We would only make a few casts before one of us would have to reel in the perch that thought our gold Aberdeen looked like a tasty meal.  Older yet, I would occasionally experiment with lures in an attempt to make them more productive.  I put an apple slice on a hula popper (if I liked fruit, fish obviously had to as well) and made a cast I remember being tremendously long.  I made a couple turns of the reel and a hefty largemouth made a giant leap with my lure in its mouth.

It has been four years since I have seen her last and another four before that.  After graduating college I re-met with her for a brief week.  She seemed to still remember me.  She greeted me with the calls of loons and a placid surface.  She would light up the sky every night with her stunning sunsets and she still leaned in and softly sang me to sleep with her bullfrog songs.  When I last left, she was tossing three foot waves in an attempt to keep me with her.  She had not wanted me to leave so soon, and I had not wanted to leave her.  But life takes hold and moves you even farther from those you love.  You keep telling yourself to reconnect with old acquaintances, to make plans for a trip together, but it never happens.  Some memories fade but others only become more vibrant in your mind.  Soon, her and I will have that shore lunch we've been planning and she can try to convince me to never leave again.  I will be bringing some apples. 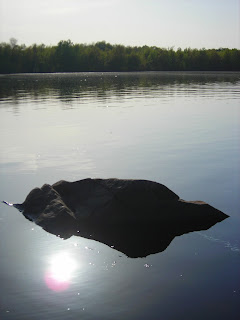 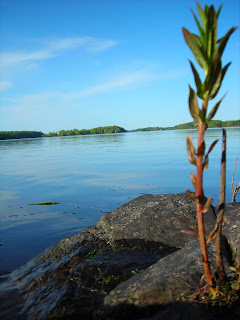 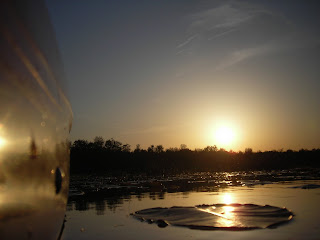