A summary of the year so far.

I have started to fly fish this year only and I am tying my own flies and learning as I go.  It seems like every year I have a bunch of "firsts," but I suppose that's how learning goes.


I went trout fishing for the first time April and battled the other anglers on opening day to get a spot on the water.  It was an experience to fish sided by side with hundreds of other hook and bait equipped predators and an experience I'm not sure I want to experience again.  Once the crowds died down a week later I went out with my spinning tackled and got 3 12" stocked rainbows on spinners. I kept them all since they will all die with the higher temperatures of the summer but I found out that farm raised trout tastes like the fish food they feed them.  If someone has a recipe that make these more palatable please share. 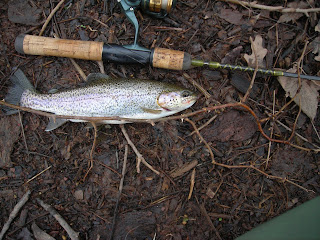 I then started fly fishing once it got warmer and used my own hand tied flies and this was my first not so large largemouth on the fly rod.  Since then, there have only been 2 occasions I've been fly fishing and I haven't hooked a bass.  Albeit, there are quite a few small fish in there, but they are still enjoyable to catch. 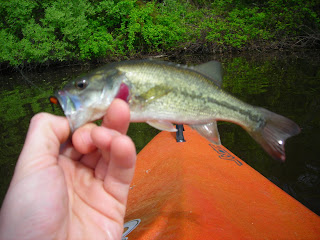 I have since then started hitting smaller streams near me and got this 15" largemouth on a black wooly bugger.  This fly has gotten me countless fish since May, but lately the fish haven't been reacting to it as strongly so I will need to find a new go to fly for the warmer months and deeper water. 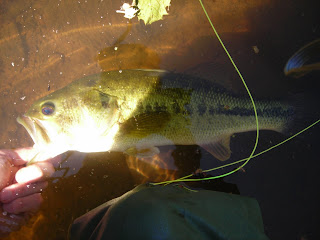 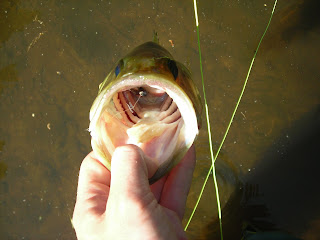 I also landed this 18.5" smallie which didn't look too healthy.  He had a healing lip from a previous encounter with a non-digestible prey item. 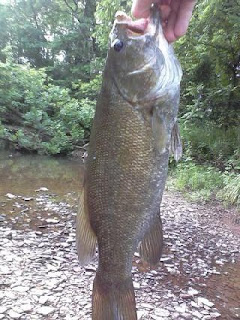 So far that smallmouth is the largest fish Ive gotten on the fly rod.  I have been trying to sight fish for carp and have made over a hundred casts to roaming carp but haven't had any bites yet.  Of course only about 10 of those casts have been accurate and I have made my goal this summer to get a carp on the fly.

I went to Sea Isle City, NJ for some flounder fishing and managed to catch 4 while my girlfriend caught 7.  We both managed to get an 18" flounder for our biggest catch. 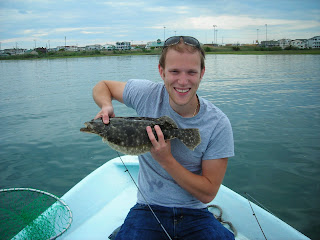 Lastly, me and a coworker went to the Susquehanna a couple weeks ago by Harrisburg.  We rented a canoe and made an 8 mile drift.  It took us until the second half of the day to find out what they wanted and we both ended up catching 8 Smallmouth each.  The smallest being 13" and we both caught a 19 incher.  All were caught on a shad colored Big O crankbait.  My crank bait wasn't producing but luckily he had 2 of them and was willing to share.  This year the Susquehanna down here has imposed a strict catch and release policy due to the declining smallmouth population due to pollution, over harvesting and predation.  The 19" is my biggest smallmouth to date and was probably 4+ pounds. 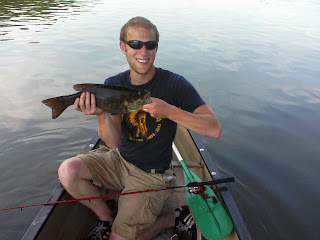 .
So far it's been a great year.  I haven't done any bait fishing except for the flounder and for catfish but I only caught a few small channels and bull head using chicken livers.  All the fish of decent size broke me off in the rocks too quick so I have to find a different, less rocky, spot.  I have caught at least 1 keeper bass each day the last four days all on my fly rod.  I am a novice at fishing and fly fishing so for me, I am doing well.  I have also fallen into the water 4 times since May resulting in 7 wet feet, 3 wet pairs of pants 2 wet shirts and 1 cell phone paperweight.  I now keep all electronics in a ziplock bag while wading. I'm not as graceful as I once was.
Posted by Stealth at 12:27