Lightning flashed over the ridge as my senko hit the water.  A storm was brewing only a mile away but lacked the energy, or motivation, to push itself over the top of the cliffs.  It was dancing its way east where it would find an opening formed by a river where it could continue south again.  I counted:  one.... two.... three.... four.... and set the hook on my twentieth-something fish as the thunder rolled over the ridge line, a trout stream, hundreds of misplaced golf balls and my head.

Some intel told me of a series of seven small ponds in dense thickets and knee high grass; a result of a now defunct golf course.  Each pond consists of its' own mini-ecosystem and underwater terrain.  There are bowl  shaped ponds nearly devoid of structure, ponds the color of lime soup with high brick walls, ponds with duck weed dense enough to bounce a chip shot across, and the  ponds perfect for fishing, with a ring of weeds around its' edges and fallen trees protruding off rocky and sandy points.

I fished them all in hopes of a lurking lunker that could crush a stray golf ball in its' jaws.  After my fifth or so fish I realized that goal would probably not be obtained, but catching a whole bunch of 10-14 inch bass might be.  I tossed, and caught fish on, flukes, senkos, frogs, and crankbaits.  Fish after unsuspecting fish tore up my plastics and knocked the paint off my lures until my thumbs were raw.  In total, I caught 26 largemouth with 5 giant green sunfish and bluegill.  I am absolutely certain those panfish crushed whatever unofficial record I had of largest fish, of each species.  There may be some larger fish cruising under the weed mats, but I still had a great day.

This knocked off the challenge of catching my limit of bass from one body of water- which wasn't as grandiose as I was hoping- but added another challenge. To catch a bluegill greater than 10 inches. 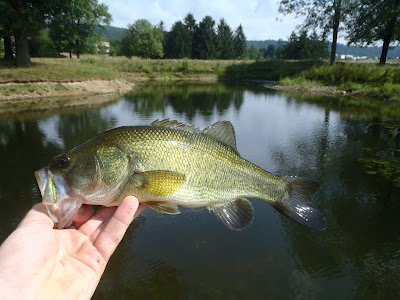 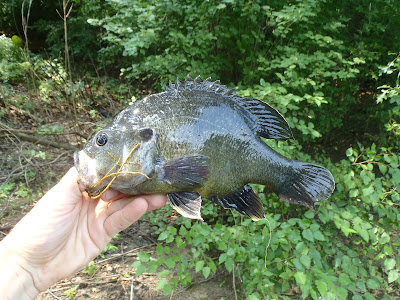 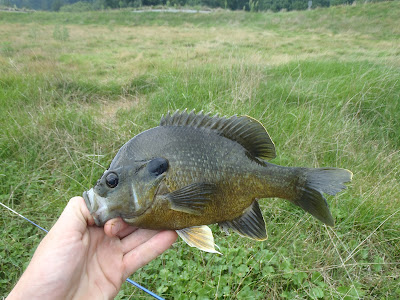 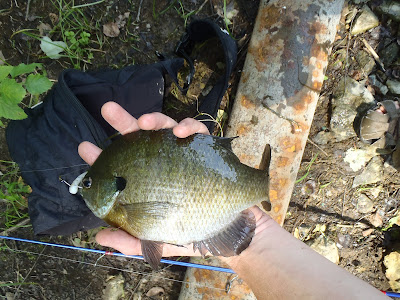 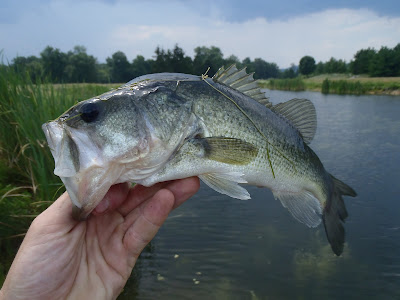 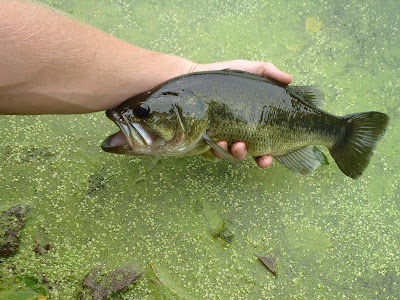 A strange thing I noticed while fishing these ponds was that there were some green sunfish nesting.  It seemed as though they collected the lost golf balls and put them in the nest.  The first thing I thought was that they were acting like bower birds and collecting items to attract a mate, but in retrospect they were probably thinking the balls were big rocks to put in the nest.  Still interesting to see.